The Shape of Darkness by Laura Purcell

A woman cuts silhouettes, almost uncontrollably, hoping to make a living. A girl glows and seems possessed at small seances. The streets of Bath appear to be a dark and dangerous place to be in a Victorian novel of mystery, deception, darkness and shadows. Laura Purcell’s latest book is full of unexplained events, twists and turns, as Agnes Darken tries to make enough money to care for her nephew Cedric and her mother in an old house. She has one friend, a local doctor Simon Carfax, who seems very concerned with her health. Pearl is eleven and being organised by her older sister Myrtle who has great faith in exploiting the power of the spirit world. This is a fiercely atmospheric novel of darkness and murder, as unexplained discoveries and events threaten to overwhelm Agnes, and the narrative snakes through the streets of a Bath which is shabby and desperate. I found this a compelling read which has enormous depth and a complex plot, even though it mainly takes place in domestic settings. The feeling of fear and dread permeates every line of this book, and as Agnes feels compelled to investigate what is really going on she is visited by memories. This is a strong and impressive novel which I was pleased to have the opportunity to read and review.

The novel begins with Agnes making a “Cut” or a portrait of a naval officer she sees by chance. It evokes memories for Agnes, but the weather forces her to turn for home, past such significant buildings as the Abbey. She arrives home to discover two men waiting for her, and she dreads the others in the house being alarmed. They want to ask her about the murder of a Mr Boyle, who was Agnes’ only customer for some time, and immediately it evokes memories and panics for her. A few streets away Pearl is discovering that the Gift of Mediumship is potentially lucrative, though uncomfortable and painful. Her strong minded sister explains that they need to hold a seance in order to become known, to exploit her gift. After dealing with her nephew and the horrid sight of a magpie devouring a baby bird, she makes her way to the murder victim’s house only to get a strange reaction. When she makes a chilling discovery she begins to think that she is a link between attacks, and becomes desperate to find out what is going on. Meanwhile, Pearl becomes more frightened and distressed by what she is being asked to do, and begins to fall into further despair.  Simon is anxious to help Agnes, but as she becomes more determined to find out what is going on she has to wrestle with memories and more.

This book reveals the benefits of huge amounts of research, yet it is never slowed down by too much information at the expense of the story. The art of cutting portraits of people is far more complex than I realised, involving basic machinery on occasion. Although stories concerning female mediums seem to be popular at the moment, this book is far more visceral and physical than others. The shadows and the darkness add to the atmosphere of this terrific book, which I found offered a lot of thought – provoking narrative and implications. I recommend this book to anyone who enjoys a well written historical novel with real depth.

I have mentioned in passing a series of books by the American writer, Laurie R King. This series features Mary Russell, who ( wait for it) marries Sherlock Holmes. It does mean that the rather male dominated Holmes stories get taken over, with plots intricate enough for any murder mystery addict. The one that you must read first is The Beekeeper’s Apprentice

Though after that I can’t work out the intended order. Perhaps it will depend on what you can get hold of to read ( reasonably cheaply, or borrow). I read The Game next, which is set in Raj India, and is fascinating in describing the disguises adopted by the married pair, as well as the intricate plot.

Then I borrowed from the library The Language of Bees.

This is fascinating, with dashes across the country, new family responsibilities, and a terrifying flight to the Orkneys. This is an excellent yarn, and the character of Mary is really well developed. I read to the end, expecting resolution, explanation and retribution. But no! At the last, when I expected everything to be resolved, the dread words, continued in the next book, appeared. I was a bit disappointed, because the story was so good.

The God of the Hive, when I ordered it from the library, was equally got, if a tad body strewn. Several twists happen which kept the reader guessing, and I was genuinely surprised several times by the revelations of the story.

The best thing about this book is the introduction of the character Robert Goodman. He is many things, and his character is well introduced at a moment of drama. Mary is very taken with him, though he is the opposite of her husband, and he becomes increasingly important to the plot.

I think that if you intend to try to read The Language of Bees, make sure that you have access to The God of the Hive straight after, or it will be immensely frustrating.

King is an American, and this slows The Beekeeper’s Apprentice down a little. Otherwise these are generally really well written books with complicated and engaging plots, and a really feisty female lead. If you can cope with the basic idea of Sherlock being older and without Watson, these are long, but enjoyable reads.

Anyway, must finish as I have several books on the go, including my first review novel. Keep watching this space!

The Beekeeper’s Apprentice by Laurie R. King is the first in a series of books about a certain Mary Russell, who becomes the apprentice of Sherlock Holmes. It is written in her voice, and Holmes (and Watson, Mrs Hudson and Mycroft) appear through her eyes, her interpretation.

This is an interesting idea, and on the whole, well carried out. King is an American, and there are times when she writes as someone who has looked up “Wales”, “Gypsies” and pre motor cabs in Google. Despite this, she does write well, delving into character, plot and enjoyable flights of invention. Several mysteries appear in this book, which poses the idea that Holmes takes on a determined, intelligent teenager as an apprentice and through setting problems and experiments develops the strange set of skills that qualify her as a partner in his continuing  work of detection.

I suppose what makes it an interesting book for me is the female perspective on the Holmes idea which is sadly lacking in the original. Even in the otherwise great series “Sherlock” on BBC1 women are seen as landladies, victims or in one episode, girlfriend. I thought that it was sad that women are still seen as optional plot devices rather than protagonists. While I thought that Martin Freeman did a good job as the confused Watson, why couldn’t we have a confused woman sidekick, rather than  a girlfriend who usefully got kidnapped? Rant over. This is a good book, difficult to put down for all the right reasons, a and promising great things to come. I confess to being baffled by the order of the books in the series, and have started reading The Game because I thought that it was the second book. Still it does prove that these are stand alone books , at least if you read the Apprentice first. Having criticised the series though, let’s have a picture anyway…

The second series of books is “The Village Series” by Rebecca Shaw. This series has been going for many years, alternating with the Country series. Every book is set in the village of Turnham Malpas, a fictional idyll which features the Rector, called Peter. The latest in  the series (I think) called The Village Newcomers has sudden death, exposure of backstories, threat and resolution. In other words, typical of the series. This is the sort of book to read in a sunny afternoon (even in the North!) and find absolutely nothing that is ever likely to have happened, anywhere, among the most unlikely series of characters. But it is fun! And I just love the idea of the clergy being called Peter and proving to be a gorgeous superman character… Read these books if you want a complete departure from reality, tv soaps are too depressing, and you need something daft to read. A quick inspection of a certain online bookseller suggests that there are many books in this series of  very British books. Read it and…giggle? 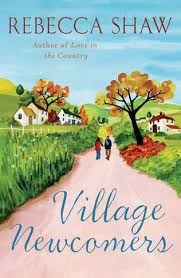