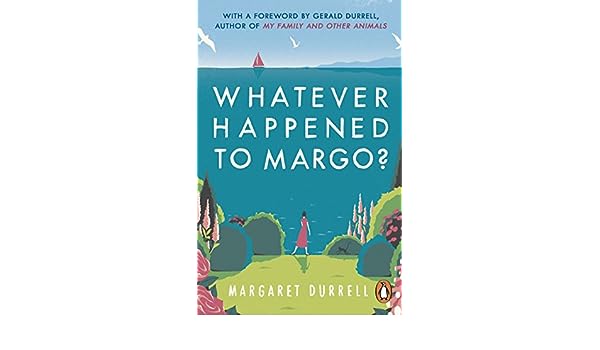 This is a book that answers some questions about the continuation of other books. Fans of Gerald Durrell’s books about his family and other animals, or at least those who enjoy the tv adaptations of his books such as the current “The Durrells”, will find something to amuse and entertain them in this book, originally published in 1995, now reprinted by Penguin. Margaret (Margo being her name in her brother’s books) Durrell was the only daughter in the slightly unusual family transplanted in Corfu by her Mother in the early 1930s, who grew up surrounded by animals and unusual human characters. Not least among these characters were her brothers, including Lawrence (Larry) the famous novelist, who had friends and visitors who were certainly memorable. In this book Margaret establishes her own unusual houseful of characters who continue the challenges and frequent farce of life she evidently grew up knowing in Corfu. Her own portrait of the remarkable people in her house is often funny, sometimes a little shocking, and always memorable.

Margo has returned to the family home in Bournemouth in 1947 following her divorce with her two young sons. Following the advice of a wealthy aunt, she decides to establish a respectable boarding house opposite, taking in long term boarders who will bring her income and occupation. She finds a house which needs work, and true to form her workmen have their eccentricities such as seeking out beer secreted around the house. Leslie, the other brother, causes problems with his dubious business practices and new love, Doris. The lodgers who turn up over the next few weeks include a painter of nudes, a married couple with a loud husband and an unexpected extra, two nurses with active love lives, and men of no particular occupation. Jazz musicians and a retired nurse also find rooms in this apparently capacious house, along with a small woman and her large son, Nelson. Nelson proves to be quite a character, combining all the cunning of an adult of dubious morals with the apparent innocence of a child. Gerald, famous younger brother, turns up with monkeys and a python, and much farcical mayhem ensues as they escape. A chimney fire brings out the brave foolhardiness of Edward, the unexpected wealth of another tenant means a party, and even the supposedly completely respectable late arrival turns out to have an inconvenient obsession with lightbulbs. Mother frequently turns up to confuse the issue, but the great aunt visit of Agatha and Patience is near Wodehouse in its panic hiding of guests, promotion of one or two lodgers as near aristocracy, and fights between pets. There are several set pieces of crisis with disapproving neighbours and police who have to be placated by the most attractive nurses. There are also touching moments when illness threatens, but the narrative soon changes tone as Nelson’s worse excesses dominate. Mice breeding, disturbed girlfriends and even a rumour of brothel keeping means that Margo never gets the peace and respectability she originally aimed for, but overall that does not seem to grieve her too much.

This book sets out to show that living in a relatively confined space with other humans can be as challenging as running a menagerie, and just as unpredictable. It is probably exaggerated reality, and the writing style is almost as chaotic as the subject matter. It is undoubtedly an enjoyable read very much in the Gerald Durrell style, which is suitable given that escaped monkeys prove one source of dismay to Margo. Gerald also becomes involved in trying to diagnose what ails one lodger, as he appreciates that the human animal can be as fascinating as his collection. This is an entertaining look at life, with an ill assorted group of humans providing much material for a book of jolly reminiscence of life in post war Britain.

I managed to track a copy of this book down last Monday in a snowy, wet Sheffield, and have read it pretty quickly! It is a quick read, if not a great literary work, and would recommend it for an enjoyable, relaxing few hours.