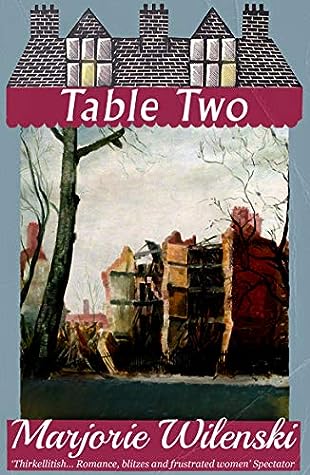 As the bombs fell during the London blitz, they put all types of strains on those who lived there and tried to work. This novel was originally published in 1942, and was a closely observed picture of what the author knew well: a group of women who worked together in a random group while under immense strain.The wonderful Dean Street Press have recently reprinted this unique novel of bravery under fire, together with all the very real challenges of jealousy, relative poverty and unrequired passions. Not that this is a wholly gloomy book, as the wit of a dialogue with an authentic sound is in contrast with some of the events of a life dominated by sirens and explosions. The main characters of women depicted in this book are a fascinating collection of the relatively well off and the women left behind by life. There is some bitterness, but also the clash between women working in the Ministry for the money, having been struggling to make a living for many years, and the well off working for the War effort. The only novel by this thoughtful and skilful writer, this book represents a very readable insight into a time when the outcome of the Second World War was far from certain. I was so pleased to have the opportunity to read and review this intense but entertaining novel.

Anne is the heroine, a young woman from a wealthy background recently left impoverished and so working at the Ministry in the translation department. Her background of friends and relatives mean that she has resources beyond the dreams of her co workers. As she starts working at “Table Two” of the translation department, she encounters the older Elsie Perne, able and efficient but starved of affection in her life of working throughout Europe, a situation ended by the onset of war. While the other women are talkative, noisy, jealous, depressive and childlike in all their accurate humanity, Elsie Perne is determined to do better, gain more status and regain her sense of self worth. She sees Anne as the only colleague who is not already biased against her, and in her desperation for simple friendship she becomes even less tactful. There are some set pieces of drama as the raids, previously discounted as empty threats, actually consume much work time and threaten the safety of the workers. Despite the London gloom, there are still glimmers of hope in a city transformed and no longer familiar, as every character must come to terms with shortages, lack of sleep and the need for concentrated work.

This book is very readable and enjoyable as a piercing view of people working together in nearly impossible circumstances. The humour is dark, the understanding of human dynamics painfully accurate, the variation between the women brilliantly drawn. I found the image of some of these women once more coming to terms with war moving, and this book is an incredible testament to the human spirit. I found the comparison with the very few male characters very interesting; they tend to be quite stock people like women often are in many books of the period. It is sad that this is the only novel published by this writer. I really enjoyed this book in every way.

I really enjoyed this Furrowed Middlebrow book from a small selection of wartime novels. I’m greatly looking forward to reading some more as soon as possible. It’s such a shame that this was Wilenski’s only book.