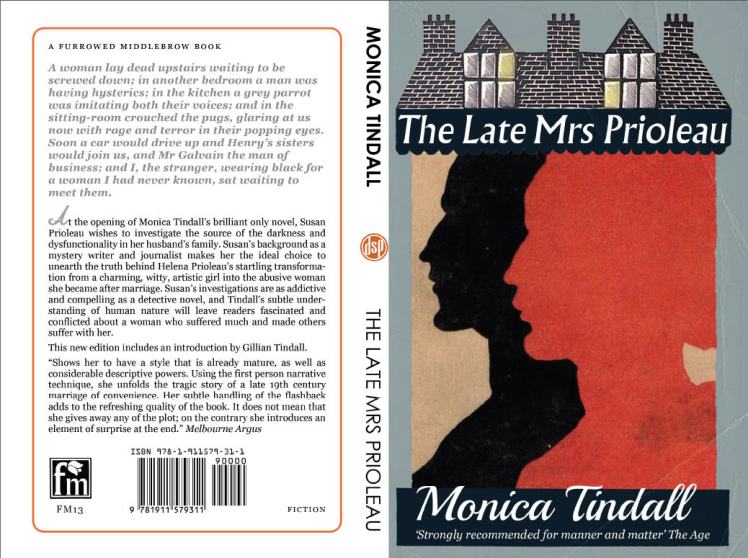 This fascinating book from Furrowed Middlebrow is many things, a family story, a mystery, a wartime novel, but most of all it is a portrait of a woman’s life. Told by Mrs. Prioleau’s daughter in law, another Mrs Prioleau, it is a largely dispassionate hunt for the details of a life which had a tremendous effect on those around her, especially her children. Reaching back into the late nineteenth century, the background of much of the novel is the displacement resulting from the Second World War, as people discover more about themselves and those they love. The narrator, Susan, has the style of a murder mystery writer who tries to cope with the tension and the damaged siblings of her husband, largely away at war. Her realisation of all the elements of a life she only observes when it is at an end provokes a parallel realisation from the reader that choices made can reverberate through the years.

The book opens at the funeral of a matriarch, as the eldest son, Austin, is distraught at his mother’s death. It becomes obvious that he is an obsessive character, left bereft by the loss of his mother who kept a stern watch over every element of his life. Susan becomes involved in trying to clear the house, move Austin on, at the gentle insistence of a doctor and family friend. She soon discovers that the older woman kept clothes and items not really consistent with her life as recalled by those around her. Austin makes scenes, is obsessed by his dogs, and generally continues to behave in an odd way. While Susan is told that he suffered shell shock in the First World War, his bizarre behaviour seems to reveal more questions than answers.

This is not a miserable book, as it is lightened by the burden of a parrot, and other odd incidents which surround a dysfunctional family. It becomes obvious, however, that both daughters of the family tried to get away from home as soon as possible, even if that meant that they made poor choices. The grandchildren are allowed an almost dangerous amount of freedom, but they appear essentially resilient. Susan’s own war work takes her to many places, and gives her opportunities to find out more about the family. I wanted a resolution to all this searching, and I was not disappointed by the revelations of the book.

This was sadly the only book published by Tindall, a carefully written story of lives consistent with difficult choices. I think it has a lot to say about women’s lot in the early twentieth century, and much of its background of the writer enduring life on the Home Front contributes to our understanding of women’s experience. The narrator is from New Zealand so she gives a largely dispassionate account of British life under trial. The thoughtful introduction written by Gillian Tindall portrays a writer with more talent than ambition, whose sole novel more than deserves this reprint by Dean Street Press. I was very pleased to get this copy of the book to review and recommend it as an unusual and touching novel.

I have quite a pile of review books to get my teeth into at the moment; more murder from Dean Street Press, some classics and some soon to be published titles from Legend Press, and Martin Edwards’ “The story of Classic crime in 100 Books”. I think that the latter might mean I spend more than a few pennies on classic crime novels myself…