I read this book as part of the Complete Novels of Nancy Mitford, and perhaps it works better after reading “The Pursuit of Love”, “Love in a Cold Climate” and “The Blessing”. On the other hand, it is a funny, well written and memorable novel that I think would stand alone.  A late book in the Mitford set, it was published in 1960 and reflects some of the confusions felt by the pre Second World War generation in the face of new pressures.

Fanny, narrator of the previous novels whose role in those books was not major, suddenly becomes centre stage as “On the day which was to be such a turning point in my life” she learns that Alfred, her safe, dependable husband, has been made British Ambassador to Paris. This completely unexpected appointment, as far as she is concerned, not unnaturally throws her into a panic. She lacks the clothes, the social background and generally a clue about what that means. Her son Basil, who she was trying to track down on that very day, has become a travel agent through the good offices of her mother’s latest husband, and her other son, David, has embraced new philosophy, a wife and a baby. The two younger boys are plotting at Eton, aided by the ambitious Sigismond, anti hero of “The Blessing”. All these boys will come to the Embassy at some point to add to the general mayhem of which Alfred is not to be told.

The confusion and panic of living life in a goldfish bowl of press and social interest is added to when the previous Ambassador’s wife continues to hold court in a part of the Embassy, confusing the picture as Fanny makes her first attempts at entertaining on a grand style. A gossip columnist for a newspaper becomes entrenched and the confusion really erupts with the arrival of Northey. This relative is supposed to be acting as a social secretary, but instead she becomes the object of attraction for French government ministers, visitors, and most other males who visit the Embassy. She also develops an unfortunate attachment to any animals, including badgers and live lobsters, who she deems in need of help. So there are situations which verge on the edge of diplomatic incidents as she rescues animals great and small and variously has them liberated or established in the grounds. She also has a delightful technique for borrowing against her wages which means that she dabbles in the stock exchange. There is also a riot, a tottering government and Uncle Matthew for Fanny to contend with, all to be kept from Alfred who (presumably) has higher concerns, including disputed islands which cause problems for all.

This is perhaps not the social satire which Mitford is best known for, nor does it have the melodrama and emotional impact of some of her other novels. It does feature many of the characters which stride through those books, even if toned down and domesticated. I enjoyed it as an amusing semi domestic tale of crisis and sort of resolution that could be translated to many lives, as impossible relatives and children reduce the most level headed person to semi despair. It all convinces me that this was Mitford having fun, not really trying to criticise or comment, but expressing her bafflement at a new world in which pop music has replaced politics, cocktail parties require military planning, and families in their extended form cannot be expected to behave rationally. A light read perhaps, but good fun and an enjoyable novel.

Does anyone else have a book that lurks in the kitchen waiting to be read? I picked up a copy of Nancy Mitford’s complete novels in a charity shop, and as it was not in perfect condition I did not feel too bad about consigning it to the kitchen for breakfast reading and any other pauses in the day. I have gradually read in this way five novels, even if some of the ideas are horribly dated.  In this way I have read The Pursuit of Love  even if I got it confused with Love in a Cold Climate  as the tv version runs both together. 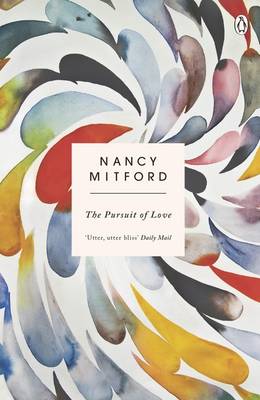 One of the most interesting things about the novel The Pursuit of Love  is that interesting feeling that all of this is well known, if you have ever read anything about the Mitford sisters in the mass of biographies, collections of letters and other books about this amazing family who dominated  mid twentieth century gossip. The novel is largely about a family of unusual girls (there are sons in the book, but they are secondary to the plot, such as it is) who live in Alconleigh with their parents, referred to as Aunt Sadie and Uncle Matthew. The Radlett family is observed by a frequent guest “Fanny”, who is a constant presence during her school holidays given that she is being brought up by an Aunt, as her mother is an infamous “Bolter” from marriages and men. Thus the madness and mayhem of the family is described by a semi – insider, who is used to the foibles of a strange and wonderful Matthew, the inconsistent Sadie, and the passions and plots of girls not sent to school. The beautiful Linda is the most featured, although love and passion are pursued by Fanny and others in the background. Thus we read of first dances, hopeless loves and an unwise marriage (or two). There are some very funny tales of an illicit visit to Oxford involving a paintbox, Matthew’s irrational prejudices, and the general progress of a family and love.

The fact that much of this novel is based on the actual Mitford family means that there is the element of embroidered truth about the writing. I have never been sure about the ‘uneducated’ girls who all go on to live such notorious lives, but this book is about the early years, and as such does not examine the fascination with fascism that dominated the lives of some of the sisters. The character of Linda comes to dominate, as she rushes into a marriage with Tony which is obviously ill fated, and then her flight to France. Her relationship with a notorious Frenchman echoes the author’s own true love for Gaston Palewski, and there are elements of Nancy’s own feelings throughout the later parts of the novel.

This is a rush of a book, where significant life events are little examined against the feelings of romance, real and imagined. The plot is not strong, but the characters are undoubtedly memorable. Fanny narrates in a self – effacing way, as this is not her pursuit of love but Linda’s, though she is involved in some of the most significant events and loss.  I enjoyed re reading this book with its funny elements, even if Linda is a frustrating character. It is a novel of its time and class, and there is not much understanding of the bulk of the population who form an unimportant background to the life and loves of the minor aristocracy. Having set that, it does not induce the cringes of horror over the right wing politics of her earlier novels, and here there is more condemnation of those who make money as opposed to hanging onto expensive ancestral seats. Read this book for a land long gone, amazing characters and search for love, and be aware of its inconsistencies which perhaps reflect real life.