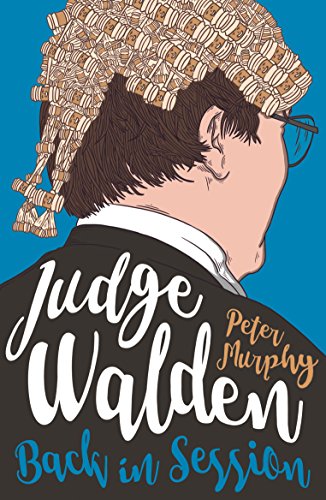 The second collection of cases from Bermondsey Crown Court, narrated by Charlie Walden, contains five stories of judicial experiences. Charlie is the Resident Judge of the court, the most senior judge with the assistance of Marjorie, “Legless” and Hubert. There are also the court staff who actually keep the court running, Elsie and Jeanie’s sustaining food and drink, and George’s carefully edited newspaper offerings. The most significant assistance is from clergy advisor, music loving and lateral thinker the Reverend Mrs Walden, the human resource behind the knotty problems Charlie has to face in the court. Raging from the ambitious and reputation conscious Lester Fogle to an international triumph, Charlie’s concerns are not only with the actual cases in the court, but also preserving the status quo against the cost obsessed Grey Smoothies, or the civil servants who haunt the courts with their own agendas. Truly all human life is here, love, hate, failure and success, with Charlie trying to keep the wheels running. Although the second book in the series, it stands alone as the cases are self contained and the main participants are always introduced. Funny, intelligent and sometimes moving, the characters who emerge from these tales are brilliantly described and come to life in this most entertaining book.

The first of the situations and cases in this book is the case of a representative of what Charlie refers to as one of London’s Disorganised Crime Families. Lester Fogle’s insistence on attempting to defend himself in person is slowing down the trial, especially as he takes an interest in the technical details from Archbold, the subject of much discussion among his family. The progress of this case in its humourous way is somewhat sidelined by one of the other judge’s preoccupation with a counsel’s appearance. Smoothing down ruffled egos is not made easier for Charlie as the press take an interest, and things get more challenging. Reverend Walden offers to help with a musical problem which has roots in the area from another era in the second case. The “Owl and the Pussycat” relates to dodgy shipping, and an historical artifact that attracts much interest. The dubious actions of a clergyman leads to some merriment in court among some sobering decisions, especially for bewildered fellow clergy, but a hint of danger makes everyone aware of their situation. The final case of careers and marriages under threat is heard against a threat to the very court itself, which provokes an unusual reaction.

The underlying humour of this book keeps the tone light, even though the subject matter can sometimes be very serious. Peter Murphy’s own knowledge of and background in the legal system means that every fact is correct, the cases have the ring of truth, and the whole organisation is written with real experience. The surprises that emerge in each story as people are involved are realistic, and written in such a way as to involve and convince the reader. I really enjoy these tales from Bermondsey Crown Court, and look forward to future encounters with Judge Walden.

Walden of Bermondsey by Peter Murphy

This is the first book of a series of books concerning the fictional accounts of life in Bermondsey Crown Court. Full of gentle humour, some revelations and non technical facts concerning the law, this book records several cases dealt with by Charlie Walden, Resident Judge. Married to the local vicar, the Reverend Mrs Walden, who sometimes weighs in with advice and a greater world experience, Charlie is an amiable and able judge who tries to find and keep the middle line, which is not always easy with all of human life which appears before him. Furthermore, he is plagued by the constant interruptions of the “Grey Smoothies”, more correctly known as the supervisory administrators from the civil service who are seemingly ignorant of the work actually carried out in the court, with their cost cutting and streamlining of the operations of the courts. He also has to supervise and sometimes restrain the activities of the other three judges, although he admires Judge Marjorie Jenkins, whose knowledge of the law and procedure frequently silence him. With Judge “Legless” whose particular skills and abilities are sometimes especially remarked on, and Judge Hubert Drake of uncertain vintage and Garrick club membership, the judicial crew are aided and abetted by several court functionaries. With frequent mention of those who supply daily food and newspapers, this community is able to withstand the various trials and tribulations that come its way, hoping always not to make the front page of the tabloid press in a negative way. This early collection of stories from the court introduces not only the characters in the building, but those who appear before them in every sense. It is well worth a read, not only for fans of Rumpole but also those who enjoy a somewhat sideways view of contemporary life.

The book opens with a surprising case of arson which rapidly assumes all the excitement of a mini soap opera. Meanwhile, Marjorie must deal with a fight in a rugby match, dismissed by the knowledgeable Legless. We learn that the defendent is always referred to as “Chummy” by the judges, a fact which later confuses a civil servant. Political punch ups later emerge, as do the risks of pretending to be a solicitor. “Artistic Differences” deals with the perils of portraiture, while matters of a recently formed state confuse everyone in another case. The final case in the book concerns the keeping of an unusual business above an otherwise respectable restaurant. Always in the background the community of the courts keeps throwing in challenges big and small, and it is only by good luck and literally good judgement that the show is kept on the road.

I have already read and reviewed the third book in this series, and my enjoyment of both suggests that they can be enjoyed as standalone reads. The humour is sometimes robust, always gentle, and small victories are duly celebrated in a satisfactory way. I recommend this book to anyone who has an interest in the workings of the law in Britain, the complications of daily life, and enjoys a fictional memoir written in a humourous way.

With today’s focus on legal judgements this is a very timely read, as well as being a gently amusing one.

Judge Walden – Call the Next Case by Peter Murphy

Fascinating fiction based on the strange but true world of the legal system has often been popular; but The Judge Walden stories have the advantage of being quietly brilliant. Having completed my first degree in law at Cambridge University, I think I have some insight into how difficult it can be to write in a human and engaging way about the law, especially without getting bogged down in obscure facts and arguments. The underlying story of this book, of a resident judge in Bermondsey, London who is happily married to a Vicar, is a solid background  for tales of people who get themselves entangled in the law, as well as the stories of how he runs the local court establishment. Although this is the third book in the series, it is a complete standalone book which may well just persuade the reader to get hold of the other two books. It is not only the law that is the subject here; the characters are so realistic that I was convinced that they were real in all their exasperating, surprising and intriguing actions. The dialogue is funny, crisp and varied, with the lawyers observing the rules with a running commentary from Charlie, and his judicial colleagues showing their real characters over disappointing lunches and battles with technology. The humour is gentle and always to the purpose, but there are also sad human stories sensitively handled. I was very pleased to have the opportunity to read and review this fascinating book.

This book begins with a case which deals with an elderly lady who has trusted a friend with money over several years. While not the most cheerful of stories, it does reveal much about the people involved in some skilful descriptions. A disturbing incident in a restaurant is full of information about salad making and jealousy, while another gives a serious view of astrology. My favourite was a rare excursion into the countryside for Walden, where the rules are reconsidered and expectations overturned.While each case is carefully looked at, in all its complexity and suspense, all are resolved but never neatly or in a predictable way. The running characters at home or at work ensure that Walden always has much to consider and attempt to reconcile to the various expectations of his life.

It is difficult to convey adequately how immensely readable and enjoyable I found this book. I suggest it would appeal to those with little or no legal knowledge, as well as those with an interest in crime generally. Its humour, to be found in such catchphrases as lunch being “an oasis of calm in a desert of chaos”, often muttered ironically, is subtle but effective. The plotting of each story is impeccable, with many details and thoughtful asides. “Judge Walden” is a cunning but realistic judge, able to predict and understand many of the statements and questions raised in court, while showing the ability to react well to the challenges of effectively running a complex establishment, while giving due credit to the members of staff around him. There is undoubtedly a market for fictionalised actions of careers in teaching, medicine and other professions, and this look at the legal system in the twenty first century is undoubtedly educational as well as extremely entertaining.