Christmas with the Surplus Girls by Polly Heron

In 1922 it was feared that many women and girls would never marry, with so many men being killed during the First World War. It became important that they were trained for jobs that would mean that they could survive without marriage, or remarriage if they had been widowed. In this third novel which looks at young women who could be called “Surplus Girls”, a young woman is pressured into training for work beyond serving in a shop. Nancy Pike is concerned that office work is beyond her, but it seems that she must qualify in order to help her desperately poor family. She is therefore sent to Miss Hesketh’s school for surplus girls, and becomes involved in not only the situations in that house, but also two work placements that both challenge her in new ways. Her progress and struggles occupy a large section of this book, as well as her meeting with Zachary Miller, who has his own problems in starting a business.

The largest linking factor with this novel and the previous two is the small business school run by two sisters in a relatively large house. Their secrets and motivations are well reestablished, especially in the light of two residents in the house: a problematic niece and an inspiring war widow with a complex secret. Thus it is perfectly possible to read and enjoy this book as a standalone novel with some characters who link it with previous stories. Also, despite the title, Christmas does not dominate the story, although for Nancy it forms particular challenges, so this book does not have to be a seasonal read. I was really pleased to have the opportunity to read and review this well written book.

As always in books from this author, the research is so impressive, especially into the social history of a time of great deprivation in cities. Thus Nancy’s birthday celebration with her family takes place in the flat she shares with her parents and younger twin sisters above a tobacconist’s shop. Her father is not a forceful man, and her mother is ill, in a time when medical help was an expensive thing for families on limited incomes. Nancy has been working in a pie shop since she left school, and enjoys the routines and meeting the customers, even if her wages are small. When her father announces that she is to leave the shop and train for office work she is dumbfounded, especially when it transpires that she is to leave home and become a student in the school run by Prudence and Patience Hesketh. Nancy is amazed to discover that she will be entering a house which seems to her to be the last word in gentellity, even though the “highly respectable, middle – class Miss Heskeths were as poor as church-mice”. When it is proposed that she will become a paying guest/student she is amazed, and distraught, reluctant to leave her mother. She finds the lessons in basic office work, such as typing, a real struggle, and yet she is allocated to work in the office of a local orphanage. She and another young woman are to effectively compete for the single job on offer, with the decision to be made at Christmas. Furthermore she is also placed for work experience with a young man’s business, Zackary, who has established a small concern equipping places with fire extinguishers. He is dealing with the trauma of fighting on the Front and losing his much loved brother. He is not convinced that he needs Nancy’s help, and especially when she makes mistakes that threaten his fledgling business. Both young people discover an interest in the other, but events seem contrived to pull them further apart so their silent attraction seems to remain no more than secrets. With Christmas approaching, can Nancy make it a special time for the Orphanage as well as the other people around her?

This is a well written novel which kept me turning the pages well into the night, as I was so eager to discover what would happen to not only Nancy, but also those who had appeared in previous books. The setting of interwar Manchester is beautifully realised in terms of the buildings and the conditions in which the people live. This is a lovely book in so many ways with vivid characters throughout, even in minor roles, and I recommend this book to all those who appreciate female led dramas.

Surplus girls, in the case of this novel, are the women who could not find a husband after the loss of the First World War. This is the second novel from this author which looks at least one surplus woman, though this is definitely a stand alone book with some overlapping characters who are well introduced here. In this book much of the emphasis is on children, the residents of St. Anthony’s Orphanage, who each have their own, often difficult story. The other focus of the novel is Molly Watson, a young woman who has secrets, and an unhappy engagement. Her involvement with the Orphanage and the children varies throughout the book, but it is a revealing point in her well constructed character. This book is full of excellent characters who are consistent throughout the book, each revealing something of themselves in many ways. Heron has a real gift with characters and the way they act, speak and generally behave, as well as the setting in interwar Manchester. There are characters that are deeply unpleasant, which gives a real texture to the book, a real focus for the reader’s involvement. I found this a very engaging read, and I was very pleased to have the opportunity to read and review this book.

The book opens with Molly working in Uptons’ sweet shop, and trying to raise money to buy sweets for the children at the orphanage. Her newly engaged friend Dora arrives, keen to show off her ring. In contrast, Norris, Molly’s fiance, immediately appears to be miserly with money and controlling of her future. He is so complacent that he manages to give the impression of generosity, even though Molly is fast becoming aware of his extreme meanness. Molly has a loving family, even though her brother Tom was affected by his war experiences. She meets Mrs Atwood who has made a career following her husband’s death, and Molly decides not to settle for a safe marriage with a man she does not love. She applies to the Board of Health which employs people to check on families in need to prevent their complete destitution, and is employed despite the odious Mrs Wardle. Her new life is made complete when she becomes a paying guest at a business school run by Prudence and Patience Hesketh. Meanwhile, a boy called Jacob who lives at the Orphanage is facing a terrifying bully alone. When Molly decides to help another boy, Danny, she discovers that good intentions are not enough. Fortunately help is at hand from the Orphanage caretaker, Aaron, but he will struggle to cope with everything.

This book ‘s setting in 1922 reflects well the atmosphere of loss that must have pervaded a society rocked by the loss of so many men. It is good at suggesting how many families and individuals struggled, especially women whose opportunities for work had increased in wartime but had now decreased. It suggests how certain people had influence in local society and how it led to unfairness and even cruelty to others. The inclusion of a supportive family was a positive note in this book, when so many novels include only negative backgrounds. I really enjoyed this book with its thought -provoking themes, especially concerning women and children. With romance and dislikable characters, revelations and details of clothes, money and physical settings, this is a really engaging novel which speaks loudly of the two issues of ‘surplus’ women and children without stable family backgrounds. 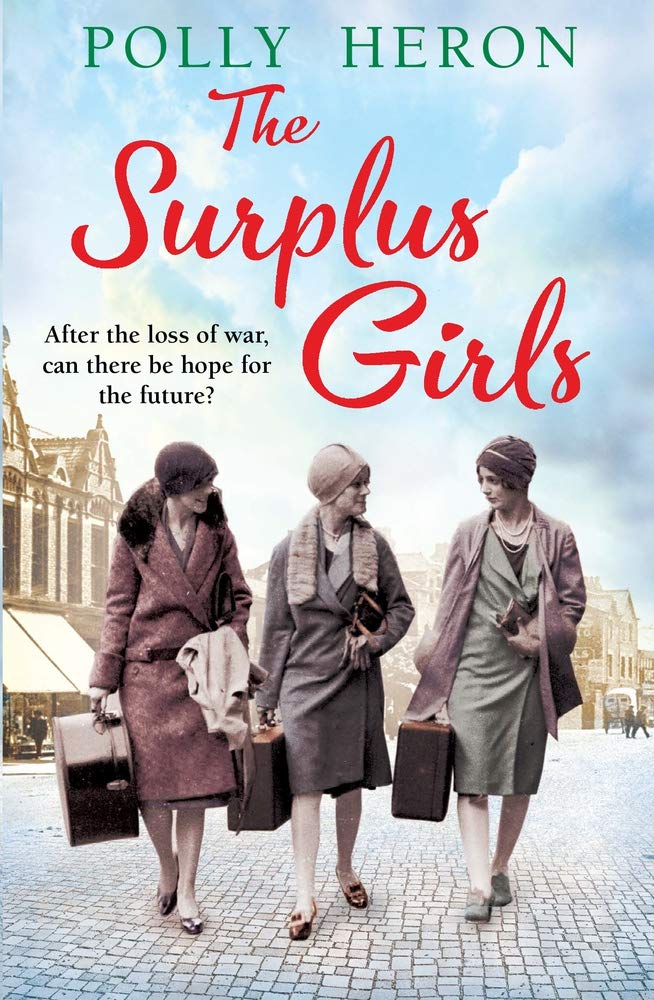 The Surplus Girls by Polly Heron

Following the First World War there was thought to be many “surplus women” who would not have the chance to marry and have families because of the large number of men killed in battle. This is a novel which concerns that problem in the case of Belinda Layton, oldest child of the challenging Layton family. Beginning in January 1922, Belinda still mourns her much loved fiance Ben and lives with his mother and grandmother rather than her family. She still makes contributions to her family’s housekeeping, as her feckless father brings in little money and drinks more. This is a highly intelligent story of a young woman desperately trying to improve her lot in a world where there are few opportunities for uneducated women, and many men are coping with the legacy of a traumatic war. Polly Heron is so skilful at creating characters that the reader grows to care about that when challenging things happen it can be so moving. Not that anyone is perfect; there are stubborn women clinging to the past, young people already gaining a bad reputation and some resourceful older ladies. There is humour, love and much more in this book of a group of people trying to find a better way to live. I am so pleased to have had the opportunity to read and review this book.

The book begins with Belinda working an extra Saturday shift in order to buy coloured fabric to break away from the black mourning clothes she has been wearing since Ben’s death. She has to cope with an abusive foreman, and a home life physically dominated by overwhelming grief. Visiting her own family shows her how little money her mother struggles to manage, with several younger siblings, and how difficult her life is in small rooms. Life for those struggling on small wages was very tough in the 1920s, and Belinda dispairs for herself in future as an unmarried woman, but equally for her mother who is unable to depend on her husband.  Meanwhile a pair of unmarried sisters suffer the loss of their father, and have to think laterally in order to preserve their home. When Belinda enters their lives she finds a whole new way of life offered , and an attractive young man. Meanwhile a young man is struggling to remember his very identity following a huge trauma in the War, and discovers that some answers only lead to more questions.

This is a lively book which raises many questions about women who are seen as lower class by their clothes and lack of education. The desperation of the poor is explored, but not in a lengthy or extended way. There are twists and turns in this book which reflects real life well, as people must try to cope with difficult situations, and show various reactions. The research into the period is excellent, as both the settings and clothes are carefully detailed, but never in so much detail as to be tedious. This is a lively and well written book which will appeal to those who love “sagas” but also those interested in the very human and social realities of the time. Belinda is a well drawn character, and I also enjoyed reading Patience’s story. This is a novel which feels very authentic, and I look forward to reading future books in this series.

A quick inspection of a certain website suggests that the next book in the series should be published in January – something to look forward to at least!