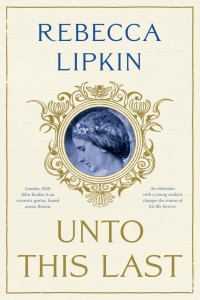 John Ruskin was the celebrity art critic, writer and thinker of the Victorian age. This immense book traces the great love of his life, a much younger woman, Rose La Touche, in a style of leisurely description and enormous depth suitable to the Victorian era.  Rebecca Lipkin has made a tremendous effort to write a book which conveys something of the many aspects of Ruskin’s interests and talents, being able to  hold the interest of dozens of people in a lecture but struggling to cope with everyday relationships. This is a big book in every sense, as Lipkin describes a man struggling with his feelings for a young woman in enormous detail. It also contains descriptions of the many places in Britain and Europe where Ruskin stayed during his projects, such as preserving records of the buildings of Venice, which showed his obsession with projects which became more important to him than his relationships. It does not always proceed  in a linear way; there is a section about Ruskin’s unsuccessful marriage to Effie Gray and how his difficulties possibly stemmed from his relationship with his ambitious parents. Ruskin’s feelings for friends, and especially women, is detailed with loving care; Lipkin has not only researched his writings minutely but also set some of them in a context which goes some way to explaining his well documented actions. This is an excellent, astute and expansive fictional rendering of a life that has attracted much speculation and interest over the years, and I was glad to have the opportunity to read and review this unique book.

The book opens with Ruskin, normally noted for his sober demeanor, chasing a carriage over Westminster bridge in London, full of excited vitality. It is because he believes he has caught a glimpse of a young woman, Rose La Touche, sitting in the carriage, so desperate is he to be once more in the company of the much admired young woman. The narrative then reverts to eight years earlier, when Mrs La Touche contacts Ruskin to request that he tutors her two daughters. His first reaction is to be incredulous, as his academic studies have been a near sacred pursuit for both himself and his devoted parents, and teaching children was a time consuming task for a man widely feted for his lectures and writing. Mrs La Touche is most persuasive, eager to add Ruskin to her social circle, and the younger child, Rose, is especially impressive in terms of her sense of humour and intellectual abilities. Soon Ruskin is uncharacteristically involved with the family, treasuring their time together, transfixed by Rose’s unconventional life view. He travels to the family home in Ireland, where he becomes absorbed in the scenery and wildness of Rose’s life, but leaves her parents unimpressed. Admiring Rose from afar, Ruskin tries to distract himself by travel, but a jealous Mrs La Touche brings up his unhappy time with Effie Gray which is the usual point of interest in Ruskin’s biography. This occupies a large section of the book, as well as giving an important insight into Ruskin’s ability to conduct a relationship. As the narrative reverts to the central timeframe, the reader has perhaps gained further insight into Ruskin’s mental state.

This is an impressive book in many ways, showing so many aspects of Ruskin’s life and works. It investigates his character thoroughly, suggesting the influence of his strong minded parents,his obsessive ability to concentrate on a project, and his devoted admiration of Rose. It is not a conventional romance, but it has much to say about the nature of love and its outworking in Victorian life. I found it to be an incredible experience to read, a moving and honest account of devotion, and an ambitious project in itself. This is an overwhelming novel of the complexity of a man using existing letters and other documents to compile a multi layered picture of a special relationship in fiction, answering some questions and raising so many more as the reader becomes totally involved in the story of Ruskin and the much admired Rose.