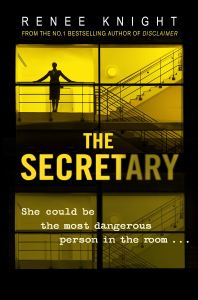 This is one of those books that you simply cannot put down; partly because you are desperate to find out what will happen, partly because the characters are just so well drawn that you believe that they are somehow real. This is an impressive slow burn thriller, cleverly just sufficiently near to real life that it is totally understandable. The characters really exist on the page, especially the Secretary of the title who narrates the novel. As she gives us all the situations and other characters through her eyes, we are left wondering how a reliable narrator she is, and just how it will all end. I was pleased to be sent a copy of this book to read and review.

This is a book which reveals the danger of someone knowing so much of another’s life that they are just inflict real damage. Christine Butcher is a temp picked out by Mina Appleton to be her personal assistant as she begins to assert her own role in her father’s supermarket company. For a variety of reasons Christine soon makes herself indispensable to Mina; she has a prodigious memory for detail, soon works out how to predict what is needed, and protects her boss even when she has reservations about what is going on. She carefully makes sure she is the only assistant with power to arrange the details which make Mina’s life possible, and actually goes further as she joins in a campaign to rid the company of various people. Christine sacrifices much to support Mina, as all her thought and ambitions revolve around the life of her boss. She imagines more than actually occurs in their relationship as nothing stops Mina’s rise in many fields, television celebrity,entrepreneur, successful wife and mother. There are cracks in the façade quite early on, but the pace picks up as questions emerge about the ethical nature of Appleton Supermarkets’ dealings with its suppliers. There are tense moments as everyone comes under examination, and it seems possible that an eye for detail is exactly what is needed. The twists and turns of this novel maintains the reader’s interest throughout and it is undoubtedly a gripping read.

I found myself really involved in this novel, as I was lulled into a rhythm of Christine’s selfless work on Mina’s behalf, and her careful manipulation of circumstances. The sacrifices made on her part explain a lot, and the carefully timed shocks are powerfully managed. This is a contemporary story of deceit and betrayal, online manipulation and computer records, forces beyond control. There is a lot of human interest in this novel, with a clear view of the sort of woman who operates behind the scenes to great effect. Knight has created some memorable characters in this novel, fitting them well into a context of subtle complexity as the situations develop in a logical way. She shows real insight into a world where there are characters who do not fit neatly into categories. This is an immensely readable novel and I recommend it as a compelling read.

I must mention the great performance of “As You Like It” at The Royal Shakespeare Company theatre in Stratford on Avon the other evening. In modern dress, there was so much life in this production, energy and engaging performances throughout. I have asked to go to other productions…pretty please!