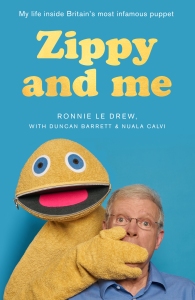 Zippy and Me by Ronnie Le Drew

Anyone who has watched children’s television in the latter part of the twentieth century onwards may well have seen Ronnie Le Drew, or rather his skills as a puppeteer. After a career in puppet theatres, television and even films, this is a man who through sheer determination has made a living from what he terms being a “dolly – waggler” or an operator of puppets. From a childhood obsession when he would perform without an audience, through the determination to get paid work, he managed to build a career out of operating puppets of many kinds. Yet like many jobs in the creative arts, nothing was ever certain or long term; even a job which led to a strong fan base for a children’s television programme like Rainbow was not forever. Despite setbacks like the cancelling of the show and revivals that struggled, the character of Zippy has become a sort of icon, an ironic favourite of students as well as those who remember the original experience of watching the somewhat arrogant “Unique”. The other side of this fascinating book is the human story of a man who has seen life from the underside, stars of stage and screen close up, and who has lived in families of all sorts. Through years of association with vivid characters whose manual dexterity, vocal talents and acting ability brought them together yet also tore them apart, this book has taken the memories of a gentle man and made them into a fascinating account of an unusual yet fulfilling career. I became very involved in a well written story of a life which has never been ordinary, and was glad to have the opportunity to read and review this book.

Ronnie Le Drew did not come from a show business back ground, or indeed a wealthy one which may have permitted a youthful hobby to become an uncertain career. He grew up in a small flat, and his parents’ marriage was unstable, with revelations that took decades to emerge. Through sheer determination and persistence he obtained work of sorts at the Little Angel, which gave him the experience and training as well as the beginning of the technical knowledge which would stand him in good stead for the changing fashions and demand for puppetry. He also made friends who would be important to him for many years to come. Coincidences and good fortune meant that he found work in theatres, television and even with the famous Muppet movies, though there were challenges when projects didn’t come off, and there were opportunities that did not materialise. I was particularly interested in the references to the great Sooty, who was an obsession of my own children, so discovering Le Drew’s connection was of enormous interest.

When reading celebrity autobiographies, they can become an exercise in name dropping and boasting of great success. This book rather admits to the sadness of lost friends, the challenge of getting and maintaining work, and the reality of times when simply going to London to find work felt like too much. Le Drew tells the touching stories of his family, his wife and children. It also tells the story of his other families, those who supported him and gave him the chance of new tasks, new opportunities. This is a gentle and often funny book, with a few saucy moments when off camera. An enjoyable book, it succeeds in telling a very realistic story of a life well lived.