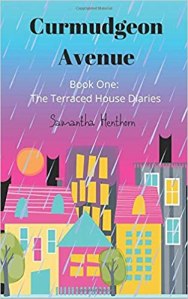 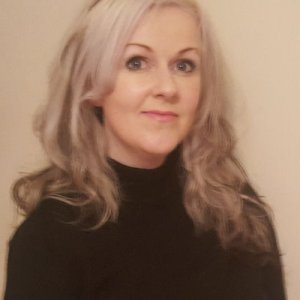 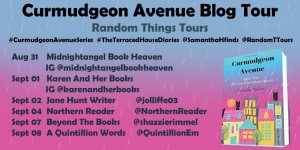 A comedy drama written from the point of view of a house are rare, so this is the second one I have read and reviewed from the clever author Samantha Henthorn. Dealing in huge events and small details is a skill within a unified narrative, let alone creating and sustaining fascinating characters, and this book demonstrates that skill with humour thrown in. Contemporary life on a street up north can often be cliched, but Henthorn manages a novel which tackles that straight on as she recounts the story of Number One Curmudgeon Avenue in Book One of the Terraced House Diaries. Henthorn uses her flair for lively narrative to tell the story of Edna and Edith, unloving sisters who have come to inhabit Number One after a series of exciting events in both of their lives. Although referring to some characters who featured in previous novels, this book is very readable as a standalone volume, as it very much features stories of its own. I was pleased to have the opportunity to read and review this lively book.

The story of how Edna and Edith move into the “proud, yet grouchy Victorian terrace” is entertaining, featuring a badly transported animal and a couple “taken too soon (in their mid – nineties)”. Not that the house is impressed. Edna is the oldest sister, bossy and inhabiting one of the attic bedrooms, while Edith is in one of the back bedrooms, while using the understairs cupboard as a safe refuge when life gets complicated (or a “chill out” space as she later describes it). The four storey house is not, to its great grief, in a good state, and a leaking roof forces the sisters to get quotes for its repair. Meanwhile the widowed Edith is on the look out for a new romance, despite the advice of her sister and the self serving objections of her objectionable son Ricky. When Edna instructs Edith to place a card advertising for a lodger in  the window of Mrs Ali’s shop, the real difficulties begin. As an unusual group of people appear in and around the shop, old and painful memories surface as well as new and exciting gossip for the characters in the book. The woefully unappealing Harold Goatshed is in the background much to several people’s disgust, and the book looks at his persistence and mentions his odious determination to become a resident and more.

This is a memorable book as it deals with characters who seem to have few attributes to recommend them. The style of writing is undoubtedly lively, hinting at other tales and further stories that may well appear later or in other places. Some of the events recorded in this fiction of unhealthy life in a northern suburb boarder on subtle fantasy, while others are pretty basic. The characters are undoubtedly unusual in some ways in their motives, but often dramatically realistic in their behaviour. This is a lively and interesting book which is easy to read and certainly unusual, and is memorable for its perspective and witty look at life. 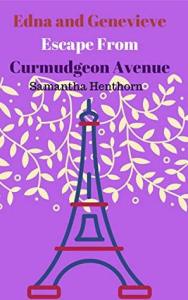 An interesting and episodic novel, this third volume of the Curmudgeon Avenue tales features the further adventures of characters established in the first two books. However, it can be read as a standalone novel with some enjoyment as the characters quickly emerge from the writing, and the setting becomes established early on. The style of this novel is of a series of events which span before the book begins and will continue afterwards.Shifting from France to Whitefield, near Manchester, England, this book is written from the unique point of view of a house, being a book of fast moving gossip type action, as romance of many types is explored with varying degrees of sympathy. It is an interesting book to be given the opportunity to read and review for a blog tour.

The book opens with the characters named in the title, Edna and Genevieve, enjoying life in a holiday gite in France. Discovering the delightful custom of buying fresh bread twice a day and actually living in the country with cheese and wine always available seems idyllic until a substantial storm floods the house, and they are effectively marooned with only gallons of wine for company. They have escaped from Curmudgeon Avenue, only to discover that France has its challenges as well.They are forced to move on, and their new hosts soon have doubts as to their lodgers suitability. Meanwhile, back in the Avenue, Ricky Ricketts is enjoying his visit to Mrs Ali’s shop, as they discover much mutual curiosity over the plans of Matteo Dubois, who has just moved into the Avenue after much confusion as to his identity. It emerges that he is apparently the adopted son of Genevieve, whose disappearance has been causing him difficulties. Meanwhile a memorable comedy couple, Harold and Edith, go about their odd and accident prone lives in their house next to Matteo’s, and when work begins in the house they are interested to know what is going on. More fascinating still is Edith’s son, Ricky’s, love life, as he seems to be linked to two separate women who are both showing signs of pregnancy. Many accidents and incidents ensue, such as stuck lifts, abandoned day trips and the contact with a much missed dog via skype. As the vaugeries of speed dating are explored and the  dangers of casual social media use exposed, the dynamic pace of this novel is well maintained.

This book has some difficulties with editing, but happily this does not significantly affect the flow of the book’s story. It is successful in terms of plot resolution and characters, and it succeeds in creating a certain confused drama out of the events of extreme daily life in the twenty first century. This is basically a good light read, with some unique ideas and interesting observations. Fans of television serials will relish the fast moving nature of this book, and it is ideal to pick up as it does not waste words. I hope that the characters go onto further adventures which result in such comedic results.

We are still recovering from a concert featuring trains, stations and music played on a cinema organ in the church hall. Sixty five people turned up to witness us reading and singing (no solos for me!), refreshments on offer and £220 raised for the local air ambulance. A good evening for all I hope!