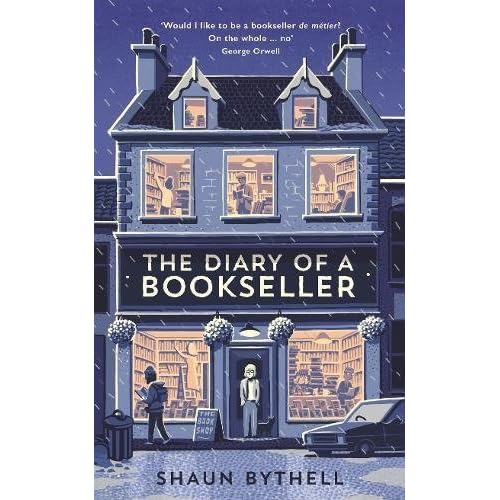 This is not a novel, not terribly exciting, but nevertheless an endearing read for anyone who is obsessed with books. It is indeed a diary, which reveals the mundane and the deeply interesting progress, or lack of, experienced by Shaun Bythell who invested in a second hand bookshop. The Bookshop is in Wigtown, Scotland’s book town on the west coast, not on the main tourist routes, and so trying to run a successful business is challenging, to say the least. When added to the problems of online book selling, including competition from the major business and postal delays, it is not always a cheerful read, but it is always a fascinating one.

Bythell is forced to restrict the number of staff he employs, and so the infamous Nicky is only part time and an eccentric character, who takes delight in finding “food” items from skips and changing the arrangement of books. Her contribution to the running of the shop is not always in harmony with Bythell’s, and her characteristic behaviour lifts this book from being another “silly things said in bookshops” chronicle. The regular customers are few and some of the tourists not really looking to actually buy the books. I think that Bythell has been criticised for his negative views on customers, but the continual avoidance of paying a fair price for the books would try the patience of a saint. I realise that some of the comments may be exaggerated for effect, but we all know how often bookshops are used as browsing spaces by people who later buy the books elsewhere. I was interested in how far Bythell is asked to travel to value book collections, and how little treasured books can be worth. Highlights of the year, as the book is strictly chronological, include the annual Wigtown Book Festival which attracts well known writers and people from the book trade. This book is full of bookish gossip and there are some recommendations and information which make this a fascinating read for book lovers.

The style of this book is a little restricted by the format of a diary, which can get a little wearing, but generally there is enough interest in the buying and selling of books to keep the reader’s interest. Each entry records the number of customers that day as well as money taken, online orders and books actually found. The book also contains Bythell’s own reflections on his out of shop pursuits such as salmon fishing, and his relationships with Anna and his parents. Thus other characters wander in and out of the shop, warehouses and book storage places are explored, and altogether this is a picture of a bookshop seemingly operating on tiny margins. Nothing is clearly stated, nothing argued fiercely, but this is a strong defence of the small, very individual bookshop and a way of life on the edge of Scotland.

So another book about books, which is probably one of my favourite type of reading. Speaking of which, after our recent trip to London and several book buys, I must get around to sorting them out. Remember that extra hour we got a few weeks ago? I could do with a few more of those…