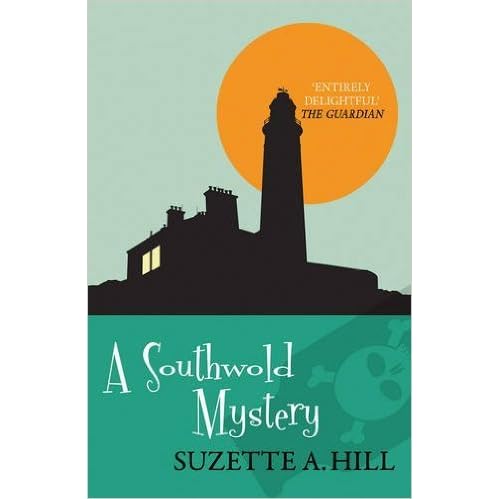 This is a mystery set in Suffolk, 1955, with lots of characters chasing around in the beautiful countryside around Southwold. On the surface this is a genteel society, with its obsessions with gardening, flower festivals and tea rooms. The local gentry live in a large house, or are successful and only waiting for their knighthood. However, when Rosy Gilchrist accompanies her friend Lady Angela Fawcett for a visit to the latter’s old school friend’s country house, they discover that their hostess has come to an untimely and extremely dramatic end. Lady Delia Dovedale has left her son Hugh, butler Hawkins and two unlovely pugs, Bo and Peep, as she dies in mysterious circumstances. When Rosy and Lady Fawcett discover that their friends Felix, florist by royal appointment, and Cedric, Professor of geology were at the scene, they decide that staying on to find out more would be a good use of their time. Thus the scene is set for investigations set amid the beauties of Southwold, Dunwich and other towns as both the local police and the four friends try to work out what has been going on, and exactly why Delia died.

I think the great strength of this book is the marvellous characters that are described, each with their own preoccupations. Even though dead, we get a fulsome picture of Delia, and much about why she was targeted, or at least died so publicly. All of the characters are given a full description, even a secretary who uses her new lipstick when being interviewed by a hapless police officer; “rather jammy” is his verdict. Jennings is an enthusiastic young detective, who keeps being told to go through the telephone directories by his boss. Felix, meanwhile, is excessively proud of his royal warrant, and carefully constructs anecdotes of the Queen Mother on the chance of being able to impress an audience. He has some difficulties on one memorable night, however, and is placed in a quandary regarding a second body. There are eccentric locals, and Hawkins expresses his devotion to the family as befits an old retainer. Rosy, meanwhile, tries to put together the clues she seems to stumble on, including photos and notes of a rather specific nature. Lady Fawcett meanwhile maintains a certain level of panic about her absent daughter Amy, while worrying about suitable hats for each occasion. It is in a dramatic denouement that  all is revealed, and the peaceful coast of Suffolk can return to its normal peaceful self.

This is a quiet comedy which depends on characters in all their individuality and dialogue which emphasises their eccentricity. The murders are dealt with in a suitably unusual way, and the plot is worked out in a convincing if not entirely usual way. I enjoyed the descriptions of the area, and the quiet alternative to a bustling London. There are some interesting set pieces, including a tea in the church hall which rations the food, and revelations which are made in unusual ways.  Although this is the third novel which features some of the characters, it definitely works as a standalone novel. As a historical “cosy” murder mystery with added comedy it works well, and I particularly enjoyed the setting.

I picked this book up a while ago while browsing in the excellent Crime Fiction section of Heffers book shop in Cambridge, a place I am missing greatly. While technically now part of Blackwells, this excellent bookshop has been selling books on that site for many decades, and specialises in the many books the students need – especially in pre internet days. When I have been more recently there has been an amazing secondhand section now on the ground floor – and it certainly stocks a very different range of books! I have been abandoned in there for many hours by Northernvicar and others, and still ask for more time. The joys of bookshop browsing!