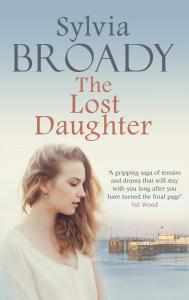 A young woman is running away in the night. In her desperation she runs into the road, and is hit by a vehicle. This is how it begins, a novel which begins in Hull, Yorkshire, 1930. Alice is a young woman whose life experience has been difficult, with a mother left widowed shortly after the First World War, and it is only after this challenging beginning and a great loss that Alice finds a new start. This is a novel of triumph over adversity, but only in a gradual and sometimes painful steps. At the heart of this book is the central question of the lost daughter, but there is also the story of a woman of her time, who works so hard and shows such flair for her tasks that the reader is left silently cheering. The 1930s were a difficult time for many people, and it is only through determination and genuine effort that Alice can get and keep a job, and begin to make something of her life. With a marriage blighted by a critical and sometimes violent husband, her basic belief in the goodness of people is what will carry her through. Well researched and deeply felt, this book has an essential truth running through it, that deep love will win out over separation, distance and fears for the future. The final third of the book is an exceptionally interesting account of work undertaken by a small group of women who were called the “Flying Nightingales”, whose bravery and commitment were so vital. This is a story packed with incident, with takes years within its stride, but also introduces some fascinating characters. I was so pleased to be given the opportunity to read and review this outstanding book.

Alice has grown up in an overcrowded household, by a mother who tried to do her best, even if that involves a great act of betrayal at the beginning of the book. Alice’s early attempt to escape led her into a dangerous marriage which had only one good outcome, her daughter Daisy. Separated from her, Alice must decide whether to sink or find a way to survive, with only the hope of being reunited with Daisy to sustain her. A firm friendship with a nurse, Evelyn, gives her the inspiration into investing in her own education while struggling to help young women whose terrible life experiences show her that she has been relatively fortunate. A fateful meeting at a class opens up new possibilities, but how can she find true love when the shadow of her violent husband remains. In a testament to the survival of the human spirit Alice must make the best of her opportunities in a world where war means separation and some loss of hope.

This book is very well researched in the large and small details which give colour and weight to  the story of people caught up in circumstances beyond their control. As the descriptions of how the bare minimum of clothes can be stretched for various occasions, how meals reflect the challenges of wartime shortages, how loved ones are left changed forever by war, Broady skilful enhances the basic strength of her main character. This is an intense and powerful book of one woman’s fight to survive despite overwhelming odds, and I recommend it to all those who enjoy an historical saga of female survival.