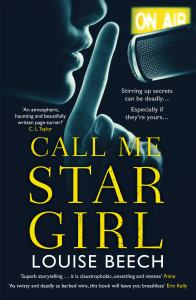 This rich mix of tension and revelation has an unusual rhythm dictated by a vital element of the plot; that Stella works as a late night radio presenter. Accordingly much of the narrative is punctuated by the need to watch the time until a track ends.This device is another layer of this impressive thriller that kept me fascinated and enthralled until the very last page. “Call Me Star Girl” is a dark novel that is an adult read of abandonment and the real danger of love for the twenty first century, of a mystery and threat that will keep twisting until the very end. The clever aspect is to anchor the drama in two very realistic characters who each narrate the story from several times,  significant points in the past and in the present. With the present driving forward powerfully to a memorable ending, this is a novel in which two women test the power of love to the very edge, and beyond.

The novel opens with Stella describing an evening spent doing her radio show on a local network, and how there is a mysterious book delivered to a seemingly locked studio.This book is meant to explain everything to Stella, but she is confused. As the narrative swings between the present and the past, we learn of a pregnant young woman who has been discovered dead in a local alley, and how Stella was abandoned as a child by her mother. From Stella’s point of view we also discover that she has an intense relationship with her new boyfriend, Tom. He has quickly become essential to her, and she allows him to do anything he wants in order to satisfy his desires. Stella is a damaged woman, obsessed by stars and a bottle of perfume that is all she has left of her mother since she left her with a foster parent without warning. As Stella introduces songs on her radio show, she recognises that she has frozen her feelings for the woman who did not put her first, but who she needs on a deep level. The star shaped stopper on the perfume bottle is a symbol of her name, the perfume is a unique memory of her mother. Stella is a fierce defender of her perfume, a rebel at school, determined to forge a career in radio where she has carefully trained to use her unique voice. She presents a final show when she has decided to leave, asking for her late night audience to reveal their secrets, fighting the emotions stirred by the people she loves, one newly returned to her life, fearful of what the discovery of Victoria Valbon’s body might mean. Tremendous events are made more intense by the small details that accompany them.

This book on some levels is not an easy read, but it always drives the reader on to discover what will happen in the narrative, with its powerful reminders of what has happened and the intensity of the feelings of the main characters. It is a tremendous read of real insight into growing young woman, coping with impossible pressures of memory and insight. Many novels are seen as difficult to put down; this novel feels impossible to leave as the surprises keep coming, and the intensity is palpable as the tracks draw to an end, playing lives night after night.

As I post this, I have been learning how to use a subtly different computer system on a chromebook! It is just different enough to throw me out of my comfort zone, so anything could happen! Northernvicar has been very patient thus far, so fingers crossed we keep learning new stuff!