From a minor crime (not committed by the author!) to autobiographical insights (“I want my autobiography to truly sum up my life so I’m going to call it The Reason You Can’t Find Your Wallet Is Because It’s In Your Hand”) this is a novel book of short thoughts, longer thoughts and notebook stuff from a very funny and idiosyncratic writer. Tm Cox is a author of several books on life in the country, humour and folklore, short stories and other fiction. This book is in memory of a notebook stolen in a rucksack in a Bristol pub in 2018. While perhaps not an enormous lost to world literature, it did contain the author’s thoughts and observations written down over a period of twelve months. As someone who writes in a notebook or else it didn’t happen, and lists of books, authors and fascinating ideas for further research, I felt sympathy for a loss of a work of personal nature. In a world where people save their thoughts, impressions and observations to social media, there is something to be said for the act of physically writing in a notebook which makes fleeting thoughts solid and captures them for later use. For Tom Cox, writing in a carefully chosen note book is forming a resource for later use, or at least a shopping list. This witty, book of tumbling thought and action is an unusual read, but a wonderfully entertaining little book which I was very pleased to have the opportunity to read and review.

This book forms a link to the real memories of a life which collects smudges of mud, the smell of a borrowed dog, the real stuff of life which is more like a printed photograph than an online image. Looking at memorable graves in Norwich cemetery with a an overly ambitious cat attempting to leap the distance between gravestones is one note, which follows an observation of cows who seem reluctant to allow him to walk across their field and sets the style for these pages of sometimes surreal conversations. Surreal messages and stories are the especial domain of the author’s father, who seems to delight in strange disconnected factoids, often transmitted in block capitals. “I saw a dragonfly in Nottingham city centre the other day” is one of the milder ones- a more brutal one involves an axe and a finger eating bird. His mother adopts a quieter and more wistful tone , such as “I’m waking up with an itchy nose and swollen eyes every morning. I think I have to stop the cat sleeping on my face.” Not that Tom himself is beyond the strange observation: in a piece about city noise as opposed to the quietness of country nights, he records that on a walk “I found the cul- de -sac where the ice cream vans sleep at night”. Those who follow Tom on Twitter will recognize some of his shorter comments such as “It’s really hard for countries not to be crap since all the people best qualified to run a country would never in a billion years want to run a country” .

This is an eminently quotable book, with one sided conversations by the author which deal with the small elements of life, the unreliable memories we have of perfect days and more challenging moments. Perfect for a quick read, especially for those who enjoy observing nature in all its variety and people in their sometimes odd moments, this is a lovely book for a friendly gift or an quiet treat. 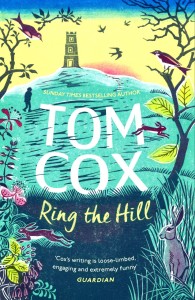 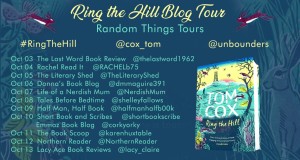 “Ring the Hill” is an ancient nickname for a hare, one of the many animals that Tom Cox encounters in his largely spontaneous rambles and journeys around various bits of Britain. Cox is a unplanned writer in many ways, drifting from topic to topic  as he describes his frequent house moves, largely unplanned but undertaken for the satisfying of a need to explore. Not content just to visit for a short stay, Cox regularly packs up all his goods and chattels and moves to a rented house in a different area. Not that he conducts a careful study of the area, walking specific routes, planning to look for particular features. While he has discovered the joys of a personalised Ordinance Survey maps which he deploys while on a walk, he also frequently departs from any planned route, sometimes because there is some form of blockage, sometimes because he is attracted by something else.

Cox meets people who are shaped by where they live, in lonely places or in places with strong traditions. Like many books which supposedly concern the countryside, he writes meaningfully about the people who live alternative lives. He writes about the treatment of the animals he encounters, about eels from an eel catcher, his disgust at a man who hunts deer, the problems of tick infestations. He is a magpie writer, picking up various things as they catch his attention. He becomes obsessed by various things such as swimming in a particular cove, giving it a special name as he gets to know the tides and behaviours of the people he encounters on his days there in a specially warm season.

The mundane things of life entertain and bemuse him, such as his relationships with indoor plants and the cats he adopts. The first move detailed in the book reveals his obsession with the inland sea levels, thus the section is called “Island Hopping”, as he travels from the higher points of Somerset to the lower. He discovers the personalities of recent  and present neighbours, speculating on their attitude to the land. Small pieces of history are dotted throughout the book, such as King Alfred’s ill fated cooking.

Cox also indulges in self depreciation, admitting to being a tall person who frequently bangs his head on all manner of things among other faults such as picking places to live without checking such things as access in bad weather and local supplies. He is fortunately supported by his largely unshockable and dedicated parents, even if he describes his father as always talking in capital letters, having a group of friends who he describes in exhausting detail, and having a fascination with dead creatures. Fortunately he can also call on them for supplies when he finds himself trapped in an isolated house, and conversation whenever he feels the need. Cox becomes fascinated on the definitions of the “North” of the country, debating whether it is a matter of strict geography or culture and tradition. Thus he is aware of accents and behaviours which may be considered more Northern or Southern.

This book defies easy description, as it is an appreciation from a very personal position of an eccentric set of observations of animals, people, countryside, behaviour and many other things. It is enjoyable and stimulating reading, as he spots the delight of glow worms, spiritual and magical influences on areas, and the extremes of weather in a particular place. Not a travelogue, or a nature study book, or a self help book, but a loose collection of entertaining observations and conclusions by a very skilful writer.