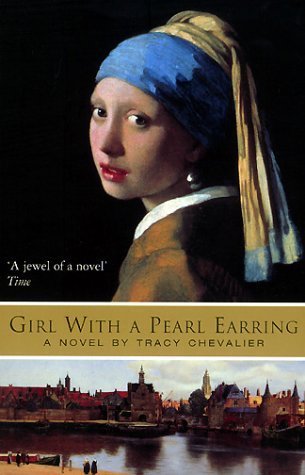 This is a book which, like the painting at the heart of it, stands out as a beautifully written tale of life and attraction in Delft in the mid seventeenth century. It represents a slice of the life of a young woman who history cannot name, but who is given a fictional life by a skilled writer. The research which undoubtedly underlies this story is never heavy handed, but blends beautifully with the fiction to present a picture of a life which is almost claustrophobic, but always within the wider setting of a city divided into areas of religion. The painter, Vermeer, is never actually named in this book; he is seen as master of the house, painter, husband to a difficult wife, and strange presence in the life of the girl whose image lives on in the famous painting.

Griet is a girl forced to become a maid in a house where the painter and his family live. From the first meeting, a knife knocked to the floor by Catharina bodes ill for their relationship, while “He” quickly realises Griet’s perfectionism and perception of colour. As Griet takes up her new role, she organises and establishes her work efficiently and sums up those she works and lives with. The other servant is fiercely loyal and fairly easy to manipulate given her attachment to Maria Thins, matriarch and organiser of finance. The children vary from helpful to secretive and cunning; the actions of one girl imperil Griet’s very employment as well as the destruction of her property. In a way this is an undramatic book, but the simmering tension and Griet’s developing understanding of the painter’s creativity dominate. Griet’s relationship with her own family changes and is fatally interrupted; truly she is alone and dependent on her own resources. Her vulnerability is her greatest comfort and reason for living as she assists the painter to paint. The unwelcome attentions of a patron means that she must be painted in an intensely intimate way; her hair and identity is concealed in the portrait, but she knows that the picture will be her downfall.

This book has much to say on the subject of human creativity and perceptions of family, relationships and development. It is a book relevant to today’s situation of a woman subject to unwanted attentions, and in this book some of the female characters have a seeming authority which becomes subjected to a man when the situation escalates. The sureness with which Chevalier writes means that the reader is drawn inescapably into the world of the paintings, seeing with Griet colour and form in a new, intense way. This book repays a second read if only to pick up the nuances of themes such as religion, attraction and subtle changes in atmosphere. It is easy to read, stylistically beautiful, and most definitely recommended to anyone who enjoys historical novels with real drive and purpose.

Having spent most of the weekend sitting in a church looking after a collection of crib/nativity sets, I thought that I would pop this post on as we recently had a book group discussion which praised this book greatly! At least it is really easy to get hold of in charity shops…

This book of short stories “Inspired by Jane Eyre” is a feast for those who love Jane Eyre, appreciate short stories, and enjoy spotting authors, some well – known, some not, having a good time. Some of these stories by women are more linked to Jane Eyre, Charlotte Bronte’s masterpiece, than others. All the stories are worth reading, though personal preference will determine favourite stories.

Twenty one authors, including Susan Hill, Salley Vickers and Emma Donoghue, were all keen, according to Chevalier’s Introduction, to contribute a story. She writes “You do not need to know Jane Eyre to enjoy these stories, but if you do those resonances will make you smile”. Marriage, relationships and all sorts of revelations dominate this collection which will not surprise anyone familiar with the source novel. Some stories, such as Vickers’ “Reader, She Married Me” tells the story from Rochester’s point of view, and Helen Dunmore’s tells the tale from Grace Poole’s testimony. As with many of these sort of versions of well – known novels, notably Austen’s, they are clever retellings of a story which often brings out aspects of characters that had not been previously obvious. Many of these stories show regret and sadness, though some reveal the joy of relationships suddenly discovered. There is much to hold the stories together, though no two stories are so alike as to be tedious. Obviously some writers handle the short story form better than others; some are already known for collections of their own stories, whereas some feel unfinished and not so satisfactory. One or two could be the start of novels in their own right, and the characters are full of their own ideas. Susan Hill’s is a surprise, as a real person from recent history justifies her actions.

There are many reasons to read this book, as the authors recount their own history with Jane Eyre. Some have obviously been profoundly affected by Charlotte Bronte’s work, others admit to never having read the novel. This is a discovery for admirers of Jane Eyre, and for anyone who enjoys the short story form with a common theme. Chevalier’s own fondness for the work of all the sisters emerges clearly in her editor’s role, and yet it is more than another biography or rewrite of one of the favourite books in English literature.

It seems a long time since last July when I started this blog and I mentioned it, but I’ve just reread ( for a Book Group) Remarkable Creatures by Tracy Chevalier

I really enjoyed this book when I read it about a year ago, and have enjoyed re reading it. I actually listened to the first four chapters on a “Playaway” a pre loaded MP3 player borrowed from the library. It is good listening to a book, and this was an unabridged version. On the other hand, 9 hours is a long time to listen with headphones, so I read the rest very fast.

This novel is good however you treat it. It has conflict between classes, gender expectations and religious/creationist beliefs. It explores the frustrations of women who do not expect to marry and therefore lack a role. It also looks at the class and gender distinctions which mean that the first person to dig up the fossils gets the least credit for them. There is a little romance, but really this is about the struggles of two very different women to be taken seriously. It is a sad book, but also a triumphant book as the whole scientific world is rocked by a girl who cannot represent herself. It is a much more satisfactory book than the others I have read by this author, and is fascinating even for those with no scientific background.

My other book for today is The Postmistress by Sarah Blake.

I first mentioned this book a while ago. It is a good book, harrowing in parts, sad, but also very interesting. I think its strongest section is the broadcasting from London in the Blitz by a fictional (though apparently based on fact) Frankie Bard, a female journalist who becomes very involved in the lives of many others by her broadcasts, her journeys and her eventual  return to America. The character of Frankie is well drawn, reflecting the problems of a woman in a place where war is so close, so personal. I thought that these sections are really well written. What really lets this book down, in my opinion,  is the American angle, which is where the novel becomes a very mournful book. I think that Blake’s descriptions of the Blitz and the displaced persons are excellent, and well written. The American sections are sad, sentimental and so slow. I know that this is an American writer, and it is a valid view of the War as it affected most of the world, but I found that it lacked the insight, the interesting drama of the rest of the book. I think that there are times when it slides into melodrama, which is disappointing.

What do you think?

On one level I had been looking forward to this book, about Mary Anning’s successful fossil hunting, for some time. On another level I had been disappointed in Chevalier’s Burning Bright about William Blake. It is a difficult balance to write the story of a famous historical character from the view point of a contemporary without getting mired in the story of that person, which is what happened in my view in Burning Bright. However, despite the sometimes painfully honest picture of Elizabeth Philpot, the focus remained clear in Remarkable Creatures. The novel was a successful depiction of the surprisingly emotional search for fossils.

The real remarkable creatures of the book are the two women, blocked variously by their gender, class and the religious constraints of the time from receiving the full accolades of the scientific world. For it becomes not just a matter of spotting the first examples of extinct creatures which throw the creationist clergy into confusion, but of recovering the bones, arranging them in an accurate way, and receiving the monetary reward. Various sharp practices of displaying the fossils inappropriately and refusing to give Mary the credit she was due leave the modern reader speechless, while the emotional upheaval that the female characters undergo seem deeply unfair.

This novel has a clear pair of narrative voices and even the non scientific reader with a limited knowledge of fossils can be impressed with this book. It is not just a woman’s book, but a deeply enjoyable and satisfying read for anyone with even a passing historical interest. The clothing, the lifestyles, and the limitations faced by the women are faithfully examined, and this is a book to be enjoyed and relished.