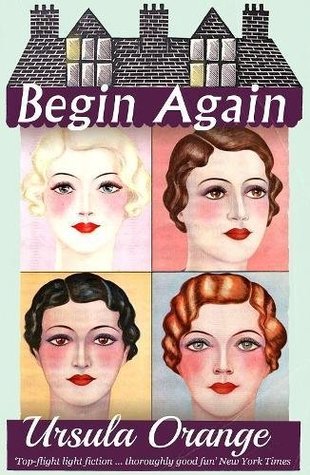 This delightful novel, which was originally published in 1936, marked Orange’s debut. Furrowed Middlebrow and Dean Street Press reprinted this book last year, and it represents a real find, giving a fascinating picture of the lives of four young women in the interwar period. They are subject to crisis and challenges which test their commitment to their life choices, and there is an underlying theme of the reality of the limitations placed on women. Funny, spirited and very much of its time, this is a novel which gives an insight into the lives of ambitious women who are discovering what the world really offers.

Jane and Florence are modern young women who share a flat in London, living independent lives and working in offices. They are Oxford graduates, but in some ways have not seen the benefits of their extended education, which is especially true of Florence as she struggles with secretarial work. Their flat is not glamorous, their lifestyle stretches their money, and for Florence life is lonely. Jane has the attentive Henry in tow, but really cares little for a romance that began in idyllic Oxford years. They are nevertheless a model of modern living for Leslie, whose comfortable life with her loving mother in the countryside seems to be stifling her artistic talents. She is determined to be independent and live in the capital like a modern young woman, hoping to imitate her friends. She invites her friends to meet her mother, hoping that their different lifestyle will influence her chances of independence. Sylvia is the fourth young woman, in love with the idea of love, with the attentive Claud with whom she enjoys a relaxed relationship. She has a loving family, who continue to put up with her despite her often expressed new views. Her younger sister Henrietta has a secret which threatens everything. The humour in this book comes mainly from the dialogue between Sylvia and Claud, and the family’s reactions to challenges. Florence writes her novel, Jane continues to be Jane and the other young women discover what they really want from life. One of the funniest scenes is when Sylvia’s father has decided to be generous, and we hear a running commentary of his pride, yet Sylvia opts to be contrary.

I enjoyed this book greatly as it explores so much about young women’s actual lives in this interwar time. This is a far more down to earth account which is not Mitford like; there is no melodrama but the realities of older adults trying to do their best for their children sometimes despite what they first desire. The parents are politely bewildered by their offspring’s priorities, and try to understand, while there are equally baffled men trying to work out the New Women. There is an almost farce like quality as several characters rush about the countryside, and there is a lightness of tone which Orange maintains throughout this novel. In some ways a book which tries to achieve much in terms of examining people’s true motives, the humour of realistic dialogue always comes through.  I recommend this very human book, for its amusing qualities and reality revealed, and am happy that it now much more easily available.

A few minutes on this book blog will show you that I really enjoy books written in the mid twentieth century by British Women. That explains my love of Persephone Books, and I hope to review their brand new (reprints) very soon. If I cannot find contemporary books, I enjoy books set in the same period but written far more recently! Who am I kidding, I just like books really…Son is worried that I may barricade myself in with books…

This extremely enjoyable novel by Ursula Orange was originally published in 1944, but it is far more than another wartime novel. Indeed, the mid war setting hardly makes reference to the ongoing bombing in London. This is a first person novel which seems very ahead of its time, featuring a woman coping, just, with the slings and arrows of a job, a live in relative, a small child and recent divorce. Her reactions as recorded in this novel are so understandable; even the title of the book reflects just what she claims she does not need, company in the time she relaxes from her job in London. This is a book from an era when the servant problem existed, but the problems which emerge are far more personal than employer problems. This is a book which tackles many themes, not all of them stuck in the mid twentieth century, and is an honest, funny account of life.

Vicky, narrator and chief protagonist, is on her way to her widowed mother’s house as the book opens. Up until now she has arranged her life very much on her own terms; after a carefully arranged divorce from Raymond she is bringing up her daughter Antonia with the assistance of Blakey, cook, sort of nanny and general servant. Sadly, her brother Philip has been killed in the early part of the war, leaving a very young pregnant widow, Rene. It is partly to move Rene back with her that Vicky is making the visit, partly to relieve her mother of the burden of a large house. While she realises that such sacrifices are demanded of many at this time, she regrets her loss of independence as she has an organised life involving three days a week working for a literary agent. Rene proves to be a difficult housemate, unsure of Vicky and soon at odds with Blakey. Barry, a local headmaster, has been seeing Vicky for a while, but she is not interested in more than friendship. In a traumatic episode, Vicky runs into Raymond, and her life becomes more troublesome.

This is a well written, involving book with plenty of humour amongst the annoyance of daily life. I enjoyed Vicky’s internal monologue, convinced that her determination to bring up Antonia alone is a responsible one, but also guilty that she has no siblings, proud that she behaves well without much discipline, and that she appreciates small treats. I enjoyed her minute examination of conversations, her understandings and misunderstandings, as they all seemed drawn from life. The problems that she encounters in her paid work are particularly appropriate for the novel, as a short story author behaves delightfully badly. This book is very well written and full of observation, controlled and well planned given the time of writing, when the outcome of the Second World War was not decided. Altogether this is a book ahead of its time in terms of realistic romance, daily life described and humour. Having just checked my review of Orange’s other reprinted book, the strangely named “Tom Tiddler’s Ground” (see https://northernreader.wordpress.com/2017/05/04/tom-tiddlers-ground-by-ursula-orange/) this book has a similar honest humour and is equally enjoyable. It is definitely a great discovery on the part of Furrowed Middlebrow and Dean Street Press, and I am really grateful for the review copy.

This reprint of Orange’s book is a welcome addition to the Furrowed Middlebrow series published by Dean Street Press, and it is one of the best I have read. As a fan of Angela Thirkell’s novels, I thought I knew this territory well; a wartime look at life in a village with the focus on some individuals out of their comfort zone. This book is set in the early days of the Second World War, before bombs fell in blitz, when evacuees were debating whether to stay in countryside safety or return to London, when people were preparing for challenges to everything they knew.

Caroline Cameron is a young woman who seems to have it all, child, husband, money and a lovely home. Constance Smith has a lovely home in a village, Chesterford, but no children and a distant husband, Alfred. When war threatens Constance welcomes not only her old school friend Caroline, her daughter and Nanny into her home, but also an evacuated mother and child. Challenges soon emerge as Alfred’s behaviour becomes more flirtatious and ambitious, and the mother from London   struggles to look after her child. When Constance’s brother George comes to the village, Caroline is diverted by his sense of humour, but also embarks on an affair in London with an actor. Mysterious letters, Constance’s developing affection for the evacuee child and the scandalous behaviour of a local teenager threatens the peace of the village long before war wreaks havoc in the country at large.

This all seems rather grim, but Orange is a skilful and amusing writer. I particularly like the asides in brackets after many characters, especially Caroline, speak, revealing what they wished to say in reality. It is this factor, together with a stronger plot, which is the main difference from Thirkell’s writing, as well as it being a stand alone book. It features many strong characters, well written and believable.  For example, Caroline spends the weekend with her lover at friends’ house, and although these characters only appear briefly they are very funny, with no idea if they have servants or how they survive. I really enjoyed the working out of the plot and thought that the characters were consistent and realistic in many ways.

This is an easy to read and involving book, of its time and reflecting the uncertainty of 1941, when no one knew how the war would proceed. The characters, though a little confusingly named, are funny, realistic and generally understandable. It is in many ways a jolly book, despite the time at which it was written, and a rewarding read. It does not totally resolve the situations it creates, and it is not a substantial piece of writing, but I would recommend it to anyone interested in this period and the experience of women at the onset of war.

Dean Street Press are publishing excellent reprints of Golden Age Crime novels, and they are worth seeking out. I have downloaded several onto my kindle, despite not being a fan of ebooks, and they have been useful to read on my kindle app when waiting around. I still prefer physical books, and have so many waiting for  attention (putting on shelves?!?) that seven days in a week are far from enough! Still, who needs to be able to see the carpet?