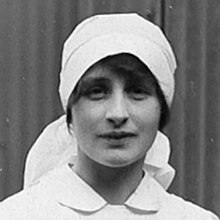 Because You Died – Poetry and Prose of the First World War and After, Vera Brittain, edited and introduced by Mark Bostridge

Vera Brittain and the First World War – The Story of Testament of Youth, Mark Bostridge

Testament of a Generation – The Journalism of Vera Brittain and Winifred Holtby, edited by Paul Berry and Alan Bishop

The Cambridge Companion to War Writing, edited by Kate

Fighting on the Home Front, the Legacy of Women in World War One, Kate Adie

This is a different sort of post for me; it is a list of books that I used for my recent talk on Vera Brittain and the First World War. This was a woman who did so much more than I had the space and time to cover in my talk, as a feminist and a pacifist during the Second World War. If you are interested in Vera, the book to read is definitely  Testament of Youth. Not an easy read, or a cheerful one, but a real book of determination to survive and flourish despite loss and other challenges.