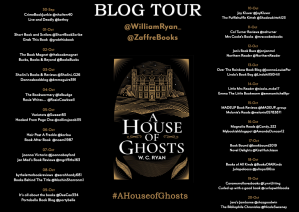 This book, as does the House, contains ghosts. It also contains much more. In the winter of 1917 there has been enough of the First World War for there to be many ghosts, or at least memories, of young men killed. There has also been enough time for recriminations, blame and betrayal to emerge. Both sides could still emerge as winners in a war that has dragged on far longer than anyone imagined, powered and empowering the development of new and terrifying weapons and the pursuit of war. In amongst all this there is still time for romantic interest, and one of the characters in this disturbing but utterly enthralling novel has been engaged at least twice.

When Kate Cartwright first appears, she seems to be yet another young woman drafted into clerical work before making a good marriage. The simple truth that many young men are no longer alive to be potential husbands may explain her relationship with Captain Miller-White, a broken engagement that she now bitterly regrets. It is unfortunate that she is ordered to attend a weekend house party in a country house with a difference; it is on an island and belongs to a Lord Francis Highmount, industrialist and armaments manufacturer. Together with his wife they are hosting a gathering which will include Kates parents, as both couples have lost sons at the front and they are hoping that two well known clairvoyants will be able to establish contact with them. Kate is told to join the party as she has some knowledge of new weaponry, codes and other, less well defined skills. Also introduced in the first part of the book is Donovan, an irregular ex officer whose war record includes eighteen months in the trenches, and helping to construct a trench in which several men died, some known to those on the island. Donovan and Kate soon discover that their own skills and experience are going to be vital to ensure the survival of the house party as well as their own, and the suspense and danger of the situation places them in testing circumstances throughout.

This book has hints of a standard country house mystery with the inhabitants of a house being trapped in each others’ company while a potential murderer poses a real and present danger. There is much else to consider here though; a spiritualist element which may or may not add to the sense of danger and confusion, and a strong theme of espionage which means that no one is quite innocent. The background of a war which is confounding all predictions raises moral issues for some of the characters as well, with at least one potential pacifist being a suspicious contender for action. This is a surprisingly intimate mystery, in which ghosts or spirits have a part to play, and not just summoned by fake spiritualists. Guns, knives and blunt weapons all play their part in a narrative which involves secret passages and bad weather. I found this book a fascinating read, with the urge to read just one more chapter, of which there are many, overwhelming. There are so many elements to this novel to consider, but it never gets confusing in the hands of a brilliant writer who is thoroughly in control of his plot. This is a reading experience I would unhesitatingly recommend, and I am so grateful to have the opportunity to read and review this book.