I had been waiting for this book for a while. I enjoyed Any Human Heart and actually read Restless twice. I found the second book fascinating, even if the ending was not so convincing. I found the opening of Waiting for Sunrise slow, but I had read something of Sweet Caress and thought that it may be a return to form.

The full title of the novel is Sweet Caress -The Many Lives of  Amory Clay. It is a reference to a fictional quote: “However long your stay on this small planet lasts , and whatever happens during it, the most important thing is that -from time to time – you feel life’s sweet caress.”

I really enjoyed this book! It helps that it is narrated as an autobiography by Amory Clay, a woman who has survived. She has a traumatic childhood, ended by a dramatic event. She picks up the skills, contacts and impetus to become a photographer and begins travelling to exciting places. She finds herself in 1930s Berlin, and takes photos of the seedy side of life. She goes on to see America, war and peace. It is a life of extremes, danger and events which change her life in unpredictable ways. Her love life is not straightforward, becoming complicated by war and peace.Her family survive and make calls upon her, but do not limit her progress. She gets some lucky breaks, but also has some challenging circumstances to endure. So, overall a believable life.

The style of writing is so realistic that I kept wondering whether Amory was in fact a real person, albeit someone always on the spot during great events and circumstances. It seems to me that Boyd has imagined and researched his way into the female perspective well, against a background of the twentieth century not dissimilar to the time period covered by Any Human Heart. No event is skimmed over, and there are repercussions which  Amory considers and acts upon, without minimizing their effect.  This is partly achieved by the device of a looking back from the vantage point of the 1970s, and the isolation of a Scottish island. It means that we know that Amory has survived, but at what cost only emerges gradually. It is very good on family relationships, whether sibling, parental or romantic. It explores the positives and negatives, the impact of decisions made and trauma which lasts.  Another convincing element is the inclusion of photographs, mainly (supposedly) taken by Amory. They are not always the most dramatic possible, but reflects what survives from a full life.

So, this is an enjoyable and well written book. I think that it does represent a return to form for Boyd, and I am intrigued as to why he decided to write from a woman’s perspective. I am glad he did.

I’m not sure why it’s been since a long gap since my last post- not managing to finish any books, courses, and sheer inertia. My not uncommon but annoying habit of trying to read about seven books at a time? Must try harder…

So what have I finished by way of books? The best has been a re read, inspired by a book group today, of Restless,  by William Boyd.

This is a very good, exciting and enjoyable book. If you are a hard core thriller fan, you may, in the words of one of the group, find it a bit insipid. Devotees of John le Carre may also find this a little lacking in detail, but given that Boyd is not writing from first hand experience I think that it is reasonable.

One of the best things about this book is that it is written about two women, mother and daughter. The third person account of Eva’s training as a spy in pre war Scotland is fascinating, especially as the shops described still exist. What is well researched is America’s attitude to entering the war before Pearl Harbour and the description of the misinformation fed to the newspapers by various news agencies.  The spy revelations are really interesting, and I would happily have read more. I found the whole account moving, fascinating and realistic. The multiple identity aspect of the novel is a bit confusing, but works within the context of what Eva must do.

The other story running throughout the book is of Ruth, the daughter unaware of her mother’s true history. She has a small son, a history of unsatisfactory relationships, and her own connections with German politics. The first person account of her teaching, her alcohol consumption and her attitudes alone would have made for a pretty flat novel, even if they are sometimes painfully accurate. The momentum of this book about the need for continual watchfulness is maintained, however, and when she joins forces with her mother it is interesting.

Perhaps the weakest point of the book is the ending, but others in the group felt that it fitted in well with the book overall. I read one review which pointed out that this was Boyd’s first book with Bloomsbury, and maybe it shows as it could well be a much longer novel with more detail and a tighter ending. While I read ( and posted about) Any Human Heart I must confess that I have made two unsuccessful attempts at Ordinary Thunderstorms.  I think Restless is a brilliant book, in many ways, and I really think it will appeal to many readers. Just be careful with the pencils, people!

In that gap between Christmas and New Year when I often feel that I should be doing something but am not sure what, I thought that I would pop in a post that is a bit overdue, even with the joys of watching tv on the internet. So, Happy New Year and all that.

Todays’ book is Any Human Heart by William Boyd. 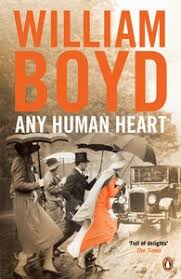 This is the Boyd novel recently dramatised on Channel Four. I really enjoyed the Matthew Macfaden sections, but found the old man sections which the tv version kept cutting to rather distracting. The novel is in the form of several journals kept by the fictional Logan Mountstuart, though throughout his long life he encounters many real characters.  This format means that the narrative does not really flow as well as it could. It is also quite a narrow perspective on the events of his life and the people he meets, but an intensely  personal record of his rather robust attitudes and outlook on life. The gaps ‘between’ his journals mean that only the major historical or personal events are covered, and many of these are tragic.

I read the book while the series was running. This did mean that I did have the picture of each character dominated by the tv versions, but I could also complare the way that the story was presented. The Duke and Duchess of Windsor were particularly memorable, and  the tragedy of Logan’s family in the war was more direct, more understandable. I think that the tv version did simplify the novel sympathetically and worked well, apart from the continuous references to the final section of Logan’s life. The book works because the reader is alongside Logan in discovering what is going on around him, rather than musing on what has been, which seems to be the emphasis of the tv version. The book kept me reading, even if I knew what was about to happen, and despite the fact that I did not always sympathize with the characters. Boyd keeps the tension going well, and says a lot about obsessions and fixations. The book is more complex than the series in many ways, and in a way is more interesting. I would compare it with Anthony Powell’s Dance to the Music of Time which deals with much the same historical experience, but at twelve volumes is a much longer read ( been there, done that). Boyd is a later writer compiling an historical fiction compared with Powell as a contemporary to many of the events he depicts in his novel. Both books/sets of books are work as narrative rather than climatic novels, but both carry the reader through a male dominated story. For a more female based, action novel, I remember reading Boyd’s Restless

which is a thriller of wartime espionage written from a woman’s point of view. I really enjoyed this book, and it proves that Boyd can write in a far more taut, exciting way. I have started his latest Ordinary Thunderstorms, but cannot seem to progress with it. Maybe I’ll try again in the new year…