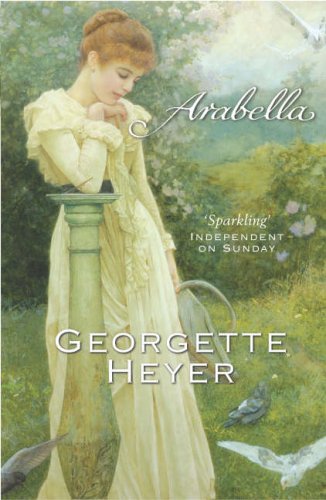 A beautiful young woman who becomes the toast of society in her season in London sounds like a standard subject for Heyer, but also being Heyer there is a twist in this social comedy romance. Arabella is the eldest daughter of a vicar and a his wife who, it is alleged, turned down several offers of marriage before they had a bevy of children. Amanda is the oldest daughter and it is hoped that when she accepts her godmother’s offer of a season in London she will receive an offer of marriage from a wealthy man which will help the family. The plot is basic, but the way that it is handled is very skilful and is covered with much humour and insight. Heyer is a genius in creating characters, and in Arabella and the hero, Robert Beaumaris, she has created two who defy expectations with style. The humour comes from Arabella’s determination to adopt helpless creatures and Beaumaris’ attitude to those who she concerns herself with throughout the novel. Arabella is not the most strident of Heyer’s heroines, but she is determined when she perceives wrong, and takes on people who she perceives to be cruel. Beaumaris is a man whose cynicism and confidence makes light of sticky situations, despite his impeccable sense of place and social necessities. There are lines here that are genuinely funny, elements that are touching, and characters whose speech alone is unintelligible even to those of the time, let alone now. Heyer’s sure touch with dialogue, situation and plot means that disaster can soon be averted, true love will overcome, and the Regency world is a secure place to plunge into through the pages of this novel.

As the novel begins, Arabella is at home with her siblings and parents, revealing their strong personalities as they prepare for a great event, Arabella’s departure for London. Her mother is supportive, remembering her triumphs in her youth, pulling out dresses and accessories to be remodelled in the common cause. Arabella is charming, friendly and beautiful, and manages to get the most unlikely people on her side. When an unfortunate accident on her journey south occurs, she breaks her journey at a large house which belongs to Beaumaris. In order to boost her confidence and give herself a confidence she lacks, she pretends to be a wealthy heiress. This impresses his companion, Lord Fleetwood, who is also taken with her looks. He has already pointed out to Beaumaris that he has turned down every beautiful young woman on the marriage market, drawn not only by his considerable wealth but also his undoubted position as a leader of society. When Arabella reaches London, her godmother’s determination to launch her into society together with her acquaintance with Beaumaris makes her quite the attraction at the many social events they attend.

Just how it is resolved is quite a triumph of Heyer’s art with people and life. Her research is impeccable and presented to great effect. This is a superb book for anyone who enjoys a Regency novel, and shows how Heyer can keep the reader guessing.

For me, Georgette Heyer, and to a certain extent her later imitators represent the ultimate comfort read. When a lot of things shut down a friend handed me five of her books to keep me going as my collection of Heyer books bought years ago was inaccessible at the time. I have since discovered a double banked shelf of her books upstairs, and was considering trying to fill in the gaps when another shelf full emerged. Rest assured that I have quite a lot of Heyers to read before I get onto those who copied her. Do you have comfort reads? Are they like Heyer?